.
Roll-Your-Own Lamb
.
Bereft of kindling newsprint,
being a particularly cold bush night,
reluctantly, I reached for the dry leaves
of the Oxford Book of Light Verse.
Ripping out Publication Details,
Index of Lines, I began
lighting Kipling, Butler and Yeats,
pausing at DH Lawrence,
tearing Pope, Swift, Anon.
When cigarette papers ran out,
a real conundrum:
with whom would I share breath?
I chose Charles Lamb’s, A Farewell to Tobacco,
a fine poem, no doubt a fine smoke.
If cancer were to fog an x-ray,
no worthier bloke.
Scissoring a rectangle, from …more from a mistress than a weed…
down to …while thou suck’st the lab’ring breath…
I tobacco’d up, rolling
and thread-tying a beedi.
Inhaling, I watched the orange edge
erasing phrases,
sooty retainer to the vine, vanishing,
more and greater oaths to break, becoming ash.
The burning poem pinched my fingers;
I stubbed it out.
Nicotine-dazed, eyes closed,
I raised supplication to the poet.
I might smoke Edward Lear next.
. 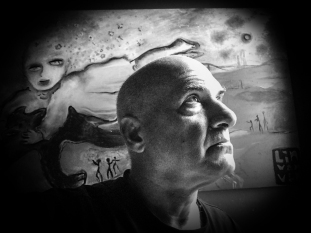 His poetry appeared in Best Australian Poems 2015 & 2014. He is currently long listed for 2017 University Of Canberra Vice-Chancellor’s International Poetry Prize, Billy Collins, judge, and was shortlisted for both the 2014 Newcastle Poetry Prize and 2014 Canberra Vice-Chancellor’s Poetry Prize. Winner of the 25th Launceston Poetry Cup. Published in Meanjin, Monthly, Southerly, Cordite, Canberra Times, Quadrant, Australian Poetry Journal, Overland, Contrappasso, and Antipodes (US). Recipient of the Advance Australia Award. Presently on staff of the Australian Institute of Music, teaching Composition, Ensemble and Personal Tutoring in setting lyrics and poetry to music. His forthcoming book, On Murray’s Run, 150 poems and songlyrics, selected by Les Murray, will be published by Ginninderra Press in Oct, 2017.