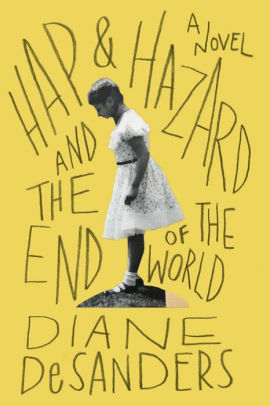 Hap & Hazard and the End of the World by Diane DeSanders is a 286 page novel written from the viewpoint of a young girl trying to understand the adult world around her.

Set in Texas during the 1940’s, innocence is challenged by situation, choice and misunderstandings.  The observations of the young narrator draw a clear picture of how a youngster can see but not understand the mysteries of adults, their issues and the choices they make.

It is difficult to sustain the strength of the storyline when it is presented from the viewpoint of a juvenile but DeSanders does an adequate job for the most part. She is creative with her chapter titles which serve as guides to the points made and symbolic messages suggested. For example, Lone Star Oldsmobile and Cadillac is the first chapter title and the situation involves a car ride with our narrator in the backseat and her father driving. In the chapter, I Call Him Nathan, the narrator details a friendship with a boy who is a foster child whose choices are not very good and the adults who choose to turn him out.  In the final chapter, The Bullfrog, our young narrator tries to interpret the frog’s situation allegedly trapped in a chlorinated swimming pool and relate it to her understanding of reality.

DeSanders places the narrator in family situations where, while she is present, the adults do not really notice her and talk more at her than to her. The young girl details the happenings to the reader without realizing the complexities of what is going on.  It is as if the reader is in the room and is reviewing, with the narrator, the mundane family happenings and the stark loneliness\ of some of the characters. The characters exhibit much psychological pain in their reactions to every day life and our young narrator is confused as to why the adults around her are acting as they do.

DeSanders is a fifth generation Texan and a history buff.  This is her first novel.

She also has an active interest in the theater arts and sings in New York. The paperback is published by Bellevue Literary Press. For information on their titles go to blpress.org.

Lynette G. Esposito has been an Adjunct Professor at Rowan University,  Burlington County and Camden County Colleges. She has taught creative writing and conducted workshops in New Jersey and Pennsylvania.  Mrs. Esposito holds a BA in English from the University of Illinois and an MA in Creative Writing and English Literature from Rutgers University.