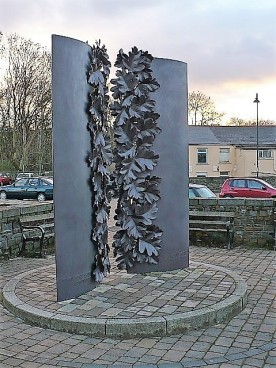 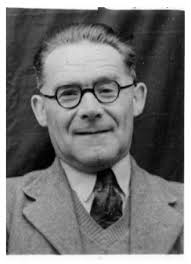 An introduction to his life and work by Byron Beynon

Travel north-eastwards from Swansea, along the A465, away from Dylan’s “ugly, lovely town”, on through the watchful Vale of Neath, by-pass the lyrical place names of Glynneath, Hirwaun, Cefn-coed-y-cymmer, and Merthyr Tydfil, continue until you turn onto the A469, follow it to the small town of Rhymney. Founded during the nineteenth century on iron and coal, it was by the early 1900s employing thousands of workers in the town’s collieries. It was there in 1905 the poet Idris Davies was born, and by the time he died in 1953 his poetry was respected and read by some of the most influential and distinguished poets of the twentieth century.

TS Eliot published Davies at Faber& Faber, writing about his work he noted “that they are the best poetic document I know about a particular epoch in a particular place, and I think that they really have a claim to permanence…….   There is great integrity, I think, about his work, and his subject-matter is something that he knew from A to Z. If all poets knew their proper material as he did, there would be less futile verse in the world.”

In January 1946, Dylan Thomas, in a radio broadcast on the BBC Eastern Service, and produced by John Arlott, read Davies’ poem “The Bells of Rhymney”, in a programme  entitled “Welsh Poets”. Many years later the iconic American folk-singer Pete Seeger  would set this poem to music, it was also recorded by the 1960s’ group The Byrds, by Judy Collins, The Alarm, and many others.

By 1973, Philip Larkin, as editor of “The Oxford Book of Twentieth Century Verse”   included two of Davies’ poems, “The Lay Preacher Ponders” and “High Summer on the Mountains” in the anthology. Since the early 1970s Gomer Press has brought out several editions of Idris Davies’ Collected Poems, keeping his work alive and available to the discerning reader. It is easy to understand why, the work is humane, dramatic, lyrical, sophisticated with a deceptive strength and a clear sense of rhythm.

In a robust introduction to the 2003 edition, Jim Perrin claimed that Davies is “ the most significant and original Welsh poet to have written in English during the twentieth  century”. Perrin considers Davies’ two long poems “Gwalia Deserta” and “The Angry Summer” as being “among the most considerable achievements in Anglo-Welsh poetry, and fully worthy of inclusion alongside other great twentieth century long poems from marginalised cultures: Patrick Kavanagh’s “The Great Hunger”, Hugh MacDiarmid’s “A Drunk Man Looks at the Thistle”, Sorley MacLean’s The Cuillin”. “

Davies had left school at 14, worked first as a miner and was introduced to the poems of Shelley by a fellow-worker named Eddie Balman. He became acutely aware of social and political issues: “But the greatest of our battles/we lost in’26/ Through treachery and lying,/And Baldwin’s box of tricks./ I began to read from Shelley/ In afternoons in May,/ And to muse upon the misery/ Of unemployment pay.” (from his poem I was Born in Rhymney). 1926 was a crucial year for Davies, the year of the General Strike and the Great Coal Strike, a long period in the mining villages of South Wales of privation and suffering. He later wrote “Do you remember 1926? That summer of soups and speeches,/ The sunlight on the idle wheels and the deserted crossings,/ And the laughter and the cursing in the moonlit streets?” (from Gwalia Deserta).

He eventually escaped the mines and attended Loughborough College and the University of Nottingham, and by the end of 1932 had qualified as a teacher. He would teach in London for several years. In 1940 he lodged at 28 Haselmere Road, Crouch End, teaching at Hoxton. He kept a diary and wrote about the blitz- “Sept, 8. Sunday  11.45am ……. perhaps one of the worst nights London has ever known. About 500 Nazi planes bombed London’s dockland in the Eastern area, doing considerable damage and killing about 400 people, and injuring many more. A big fire blazed along the river for hours and the London sky was wonderfully lit-up.”The next day he wrote “I travelled by tube this morning……I have seen a good deal of damage today, most of it round Old Street Station. There’s a big crater in the street, and the Maternity Hospital at the corner was hit….Hoxton has suffered severely from the raids of the last three nights. Crouch End, so far, has escaped any severe damage,”

The writer Glyn Jones, a friend of Davies, wrote an essay about him in 1968, stating that “ He became a great lover of London, of Hampstead Heath, of Epping Forest and especially of the Charing Cross area with its second-hand bookshops. And he got to know many Welshmen then living in the capital, including Aneirin Talfan Davies, Keidrych Rhys and Dylan Thomas, whom he used to meet on Friday evenings.” Welsh writers frequented Griff’s Bookshop in Cecil Court, and in the early forties and early fifties it was kept by a man named William Griffith, who kept a representative stock of Welsh and Anglo-Welsh publications.

In 1938 Dent published his volume “Gwalia Deserta”, the first of four published volumes (the next three would be published by Eliot at Faber). During the period 1939-1945, he was evacuated several times with schools from London to Northamptonshire,   Hertfordshire, and to Wales. It was during this time that he wrote “The Angry Summer”, a poem of 1926, expressing his feelings for his people and what they had endured. This long poem of 50 sections, along with”Gwalia Deserta” (36 sections), and his autobiographical poem “I was Born in Rhymney” plus several shorter poems such as “Waun Fair”, “Capel Calvin”, “Rhymney”, “London Welsh”, “Midnight”, “Hywel and Blodwen”, do I believe have that claim to permanence which Eliot noted.

By the early 1950’s he became seriously ill with cancer, and just a month before his death his Selected Poems was published by Eliot in March 1953. Eliot had already published Davies’ “The Angry Summer” (1943), and “Tonypandy and other poems” (1945). Idris Davies died at his mother’s house in Victoria Road, Rhymney in April 1953. Today there are no mines to employ the workers, time has brought many changes, but Davies’ “poetic document” remains. There is a plaque on the house in his memory, and opposite there’s the library which also remembers him with a plaque,and a display of some of his books, pens, photographs and the family Bible. Here then was a poet who had compassion for the plight of the people he had been brought up with, a poet to echo Eliot, who knew his subject matter.

In late 2016 Faber & Faber published “The Map and the Clock: A Laureate’s Choice of Poetry of Britain and Ireland” edited by Carol Ann Duffy and Gillian Clarke, which includes two of Idris Davies’ poems “The Bells of Rhymney” (poem xv from Gwalia Deserta) and “Mrs Evans fach” (poem 7 from The Angry Summer). His poetry is direct, it sings, and continues to be read and appreciated into the 21st century.

For further reading and sources on Idris Davies:

The Dragon Has Two Tongues essays by Glyn Jones  (Dent 1968)