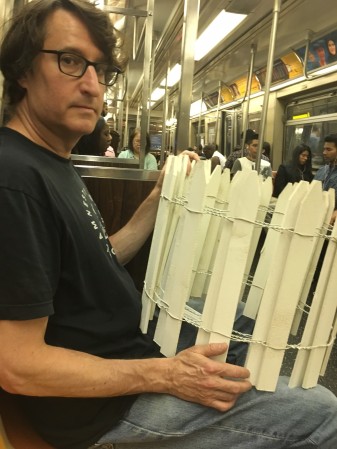 It sits quietly in my closet the third closet the one I don’t really use coiled into itself clasped tightly.  Perfect for the house of a cat or small dog.  It served a short purpose on a small stage in a filthy corner of the City one time a long time ago — suburban suffocation and impassable boundaries and whatnot — but like my old soccer cleats (which I also still have for some reason) there it sits coiled like a calcified snake, waiting.

Certain that it will someday uncoil again come back to life and reattach itself to a small dance presentation which balloons like a frog’s bellows to become a large dance production spilling out beyond the confines of the little picket fence patiently waiting in the closet that I almost never use.

There are extra pillows and blankets in there, as well (wrapped tight in plastic) for the guests who almost never come and pile upon pile of bubble wrap waiting patiently to wrap paintings which are sold or given away or sent to an exhibit.  They never go anywhere — they sit stolidly on the walls their impastoed crevices capturing the falling motes and the bubble wrap unmoved waits on the shelf dowager above the floor where the little picket fence sits corkscrew.

I can’t place it.

This happens: things arrive with great purpose and some fanfare and suddenly they are   but another piece of dusty infrastructure undergirding a life which is not uncoiling as it was certainly meant to.

I went out last night — without my picket fence — and time slowed almost to a standstill and I moved syrup through the East Village evening and entered an empty North African restaurant and sat at the blue-tiled bar all alone in the careening interior empty tables hopefully set and waiting and I listened and reflected and listened and sat and then I asked the bartender how long the song had been playing — it was by the French producer St. Germain.

I was certain that he and the empty restaurant and the world had joined my wave and that he would say “seventeen hours” or “forever and forever,” but he looked into his phone and said: “seven minutes and twenty four seconds.”

I nodded, as if I understood.

See, this is why we need picket fences: small or large or simply metaphorical.  To contain the endless possibilities which might take us too far away, beyond the point of no return.  The picket fence — dumb, solid, familiar —tells us what is “ours” and what isn’t; what is “here” and what is there.

Without the picket fence?

Well — a tiny grain of pepper in the vast stew of existence.

A place so mundane so absolutely solid that it becomes a container to hold the necessary — and properly exclude the unnecessary.

A garden state enclosed and encompassing.

A place where biographies are written which move with certainty from birth though life to death.

A mystical metaphor hiding buried within an innocuous land mass

Tom Block is an author/artist who can be found at www.tomblock.com Tom is the founding producer of the International Human Rights Art Festival. www.ihraf.org