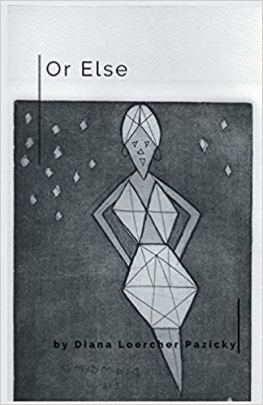 The first poem in this collection, titled “Else” — not “Or Else,” as the book is — explores the implications of said modifier (it can be either an adverb or an adjective). An epigraph reminds us that the word derives from the Old English word elles, meaning “other.” The exploration is anything but academic. “Else,” the speaker tells us, “encompasses the unknown / the alternatives that impinge / upon our constricted lives.” It is “an enchanted island … inhabited by sirens singing, / Where else? Who else? What else?”
A couple of pages later there is “Meditation on the Pencil, While Grading Papers” (Diana Loercher Pazicky is a former English professor at Temple University). “The pencil allows one to reconsider,” the speaker tells us, “stop time and go back, / undo that hasty judgment ….” Moreover,
.
Erasers are soft, forgiving,
leave only a faint smudge,
a chance to correct oneself
before presuming
to judge another.
.
This is whimsy segueing into the humane, and is characteristic of much in these pages, leading one to suspect that Pazicky’s former students remember her fondly. She wears her learning lightly as well. Most of the poems in the second of the three suites gathered here make reference to the gods and goddesses of mythology, though in ways that are far from solemn. “Venus Redux,” the first of these, is really about the speaker’s mother. “Venus had nothing on you, Mom,” it begins. The thought of her mother’s perfect body calls to the speaker’s mind the works of Praxiteles, Botticelli, Titian, and more. But in those she sees “only the memory of your body … as you paraded naked through the house, / and I hung back in the shadows, furious, / knowing such perfection could never be mine.”

This poem comes poignantly to mind when one arrives at the third suite. “Seaside Victorian” tells us that “The house she inhabited / slowly inhabited her. / Memories yellowed, hardened, / like the doilies and antimacassars ….”

“As she sank into solitude / the house acquired breath, /even speech, children’s voices, / and her husband calling her ….”

The “she” in that poem is never named. But we soon read, in “Actively Dying,” that “My mother is ‘actively dying’ / as opposed to passively dying, / which is what the rest of us / are doing every day.”  The speaker elaborates:
.
Actively dying really means
the body has staged a coup
against the arrogant mind,
that delusional tyrant
twirling and whirling
his hollow scepter
like a child spinning a top,
who thinks he’ll live forever
until the body revolts,
brings the old fool down.
.
“Ashes” makes things even more plain:
.
The marble urn is heavy,
its contents weightless.
I unscrew the lid, pour
my father into a bag,
turn my head away
to avoid inhaling the dust.
.
That last image seems to say it all, but not quite. “Next I open the wooden box / containing my mother … I empty the box into the same bag.” And then, “I take them / to the bay they gazed at every day /from the windows of our house ….”

All is united — husband and wife, father and mother, daughter and house.

There is a surprising range of thought and feeling encompassed in these few pages, all of it expressed with the sort of clear-eyed unsentimental observation one gets from someone like Basho. Do read it. Or else you’ll be missing out on something really worthwhile.
.
You can find the book here: https://www.finishinglinepress.com/product/or-else-by-diana-loercher-pazicky/

Frank Wilson is a retired Inquirer book editor. Visit his blog Books, Inq. — The Epilogue. Email him at PresterFrank@gmail.com