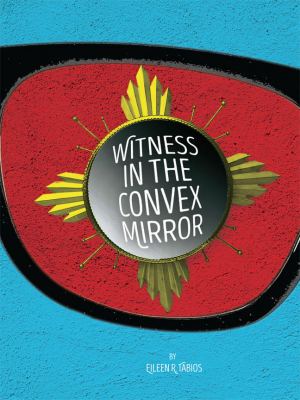 .
By g emil reutter
.
Eillen Tabios is a prolific poet and editor, with over 50 collections notched on her belt, she continues to inspire with her ability to cast new light into the world of poetry. This past May, TinFish released the collection, Witness in the Convex Mirror. The concept to create poems beginning with the first two lines in each poem from Ashbery’s poem, Self-Portrait in a Convex Mirror.
.
This was no small task. We are fortunate that this project was developed by a poet like Tabios. She is the ultimate crafted poet whose hard work, insight and passion for the written word flows throughout these 135 pages of poetry. She begins the collection with The Song of Space.
.
We set out to accomplish and wanted so desperately
to see come into being our corralled chords
disciplined into the sublime—it is otherwise impossible
to heighten cathedrals into a space where supplicants
will feel their smallness, thus, comprehend they are not
gods.
.
Later in the poem she writes:
.
I opened my eyes to
a rainbow settling itself upon my chest. I looked at this
odd light and whispered, “I’m no pot of gold, dear
Parmigianino”.
.
The images of the heightened cathedral, smallness, comprehending they are not gods and then the fresh image of a rainbow settling itself upon my chest, simply beautiful.
.
In the poem Civilization and Inheritance she tells us, like yellowing leaves on shrubs tentative/ before marauding birds. One’s beak/ flashed open to reveal a dangling worm— / surely imagination need not be radicalized/to fortell the fodder’s fate.
.
In the poem, Integrity, she opens once again with two Ashbery lines and then brings us to unexpected places:
.
The surprise, the tension are in the concept
rather than its realization. In this way, integrity
is possible as, like Picasso, we break into
irreparable fragments the image that assumes
it bespeaks the reality of psychology. To see
that woman sleeping amidst laundry piled up
in the corner of a room, her fingers trapped
in the pose of folding her master’s shirt, must
be to become broken witness—if not, integrity
becomes a dream trapped in a mirror. Only
the broken can muster the ability to howl
.
The use of two of Ashbery’s lines to begin new poems is bold and courageous. Tabios has never been a poet to conform, she shatters the mirror. Its shards of images and words, both beautiful and harsh, of the comfortable and uncomfortable glitter like diamonds spilled out upon the floor. The book is divided into five sections. Abstract Expressions, The Sheriff’s Advice, Cubism of Color, Scars and Excavated Tankas. Each section is an honest reflection of the world we live in.
.
Euphemisms for Mortality
.
And swerving easily away, as though to protect
what it advertises, the gaze bypasses the age
of beams and leaded panes—no one wishes
to look at the old unless they can be elevated
by euphemisms. Say, “antique.” Say, “powerful”
Say, billionaire.” Say, “convex” for widening
the gaze when focus means the revelation of
mortality. You wake up one morning and, unlike
yesterday, the hand is spotted with dark spots,
the jowls hang, the breath catches on the third
step, and the prodigal child is at the door
with hand stretched for any inheritance. From
that point onward, everything you muster on
the piano shall be nostalgic and poignant. For
novels, you return to the Russians—at least
they live again when your trembling fingers
open their books. But you suspect no one will
read you, and you professed your entire life
that you are a poet. Damnation: I am a poet!
.
You can get the book here: Witness in the Convex Mirror
.
g emil reutter is a writer of poems and stories. His most recent collection is Stale Bread and Coffee
.
.