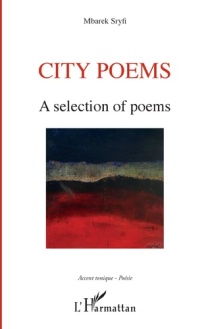 .
By Lynette Esposito
.
In ninety-four pages of poems that range from light hearted ironic observation to serious reflection, Mbarek Sryfi presents a world of contemplation.
.
The volume has two sections, The Trace of a Smile and City Poems.  The first section presents poems that have just a light touch of humor.  The second section of poems are more serious in nature and tone.
.
On page twenty-six and twenty-seven in the first section, Sryfi asks a question in the title: Where the Hell do the Birds go in War, anyway? While the title evokes a sly smile from the reader, the poem is serious about the shocks of war.  Sryfi shows a mother in her red PJ’s sitting on the step with her daughter in blue PJ’s.  Her eyes are vacant.
.
Under the sign sits the young mother in her red PJ’s
And blue blanket.
Hazel eyes,
Empty gaze.
.
Her little daughter in her blue PJ’s
Rummaging in a plastic bag.
Leftovers.
.
The scene has been set. The aftermath of a bombing focuses on a mother lost in thought holding a tin cup begging for money. The images of desperation and loss of hope in this eleven-stanza poem–some stanzas only one line–is clear and poignant. The last stanza has the mother becoming aware of where she is and her reaction.
.
“Merci” she whispers
Without looking up.
.
Sryfi’s poem is powerful and clear.  He is skilled in form and strong in powerful line breaks.  He sets the contrast between the morning coffee and the bakery and the woman sitting on the step in such a way the reader feels the despair at the same time smelling the morning coffee from a nearby shop. The common language works well here and the poem succeeds in presenting the leftovers of war.
.
Throughout the book, poems vary in size, form and theme.  One of the short but interesting poems in the second section is The Autistic Child on page sixty-six.  This three-line poem sets the scene with the title and gives the reader a clear view of a child wanting to communicate but can only use his eyes.
.
He stood there gazing.
His tongue helpless
But words dripping from his eyes.
.
Although the poem is short, it is so direct that the reader can almost see the silence. This experience with an autistic child is realistic and tugs at one/s heart.
.
On page seventy-eight, Till the Last Sound Ceases to Exist is a one-stanza, fourteen-line poem that is enhanced at the beginning with a quote from Eric Sellin: “History may well be a matter of one’s relative age.” The poem is unrhymed and conversational.  The narrator begins I like listening. The poem addresses the skill of listening and the artistry of sound. But, again, Sryfi has used his title to telegraph what he is really talking about and the last line brings it home.
.
What you ought to do is just wait for death.
.
Although the poem speaks of listening and sound, the message is more somber.  If there is no one to listen, there is no sound.
.
Sryfi uses many poetic technics throughout this volume including quotations from other authors, translations, mixed-line and stanza lengths as well as creative images. The book is interesting and has a freshness to it.
.
The book is available from: https://www.editions-harmattan.fr/livre-city_poems_a_selection_of_poems_mbarek_sryfi-9782343214481-67488.html
.
Lynette G. Esposito has been an Adjunct Professor at Rowan University, Burlington County and Camden County Colleges. She has taught creative writing and conducted workshops in New Jersey and Pennsylvania.  Mrs. Esposito holds a BA in English from the University of Illinois and an MA in Creative Writing and English Literature from Rutgers University.
.
.
.
Advertisement