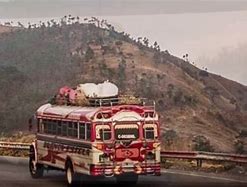 .
Guatemalan Chicken Bus
.
The woman next to me caresses her chicken;
it’s probably tomorrow’s dinner.
The bird shits in its basket, and she inspects
the product carefully on this rickety
.
former school bus. The driver’s going fast,
screeching around cliff curves, blasting his horn,
as a woman across the aisle yells out a prayer.
Next to her, a man starts to laugh and offers
.
the gringa a tamale. Many hands pass it to me.
We’re over maximum capacity and there’s nothing
to hold onto except a fellow passenger
or an animal wedged in the aisle.
.
The ayudante leans down from the roof
to collect fares through the windows—speakers
blasting the beat of the rock band Santa Fe.
Che Guevara looks down from a photograph
.
mounted among the tassels and Christmas lights.
We are lucky so far—no road robbers
or wheels falling off.
As the bus stops for more people, then speeds
.
off again, smoke billows from the back.
A man standing in the aisle crosses himself
when we reach Lake Atitlán after hours of potholes,
the woman and the chicken asleep in the heat.
.
I’m pushed out quickly with other passengers
as new ones shove their way in. The ayudante
unstraps a goat from the roof rack, throws down
packages and backpacks, including mine.
.
Vamos vacios—we go empty—he yells at anyone
who looks in his direction. I see Jesus on the cross
painted on the rear as the bus speeds away,
two more goats strapped to the top.
.
Ode to Something, but It’s Not High School
.
To the boy whose father
bought him a red Corvette
his senior year, who drove
.
up to the high school, blond
and improbably tan, doing loops
instead of going to class,
.
then, after a day of too much jug wine,
totaled himself and the car,
and to the skinny, hyper boy
.
the girls all liked who walked
out of a tenth-story window,
the acid causing him to believe
.
he could soar over the city,
because that was the legend—
that you’d fly—and to the one
.
I crushed on who, at one of my Friday
night basement doo-wop/make-out
parties, stole my copy
.
of Maurice Williams & The Zodiacs’
“Stay,” but didn’t stay, coming back
from Vietnam in a body bag,
.
and the one who was a walking ad
for keeping away from heroin,
to all those who OD’d anyway, and
.
to the one who died from leukemia—
not everyone just being
stupid, some really trying hard
.
to live—and then, after all the funerals,
even then, to the one who swallowed
a bottle of aspirin and a can of Pepsi
.
when his girlfriend dumped him,
she, sitting on a curb outside school
sobbing we shouldn’t blame her,
.
every single kid staying away, he
returning to classes two weeks later,
with his same weird gait, lopsided smile.
.
SUSANA H. CASE is the author of eight books of poetry, most recently Dead Shark on the N Train, from Broadstone Books, 2020, which won a Pinnacle Book Award for Best Poetry Book, a NYC Big Book Award Distinguished Favorite, and was a finalist for the Eric Hoffer Book Award. She is also the author of five chapbooks. The Damage Done is forthcoming in 2022 from Broadstone Books. She has co-edited, with Margo Taft Stever, the anthology I Wanna Be Loved by You: Poems on Marilyn Monroe, forthcoming in 2022 from Milk and Cake Press. www.susanahcase.com
.
.