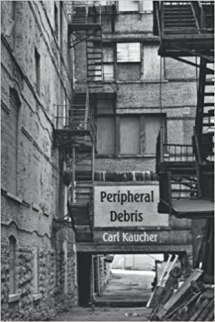 .
By Charles Rammelkamp
.
Channeling the mystical meandering jazz bebop philosophical musings of Jack Kerouac, Carl Kaucher’s new collection focuses on the gritty and ponders the eternal questions of existence.  At the end of the first poem, “Pond Scum,” he asks:
.
If life is God’s music
will the chorus end with a round of applause
for a song well sung
or will there just be silence?
.
Meanwhile, in his elegy for a dead friend, “Steve,” he asks, “How many bites to eat a Big Mac?” Kaucher isn’t always so serious!
.
Peripheral Debris is divided into two parts, “Peripheral” and “Debris.” While both evince Kaucher’s distinctive style, the poems in the first part mainly seem to develop his outlook while the poems in the “Debris“ section are a kind of travelogue through small town Pennsylvania, from the perspective of the self-described “Hobo Poet” whose attitude the reader has since come to understand.
.
Indeed, the poem, “Kerouac,” from the first section, honors his inspirations.
.
Beating loud
the bongos of suffering
so that
we might feel the rhythm
and vibrations at a distance
not going near
but knowing still
all dimensions
of the deep discordant drum
drubbing of desolation
the shamanic inflection
angelic resurrection
and insight
of the human predicament
on the down and out
with dissonant choruses
to wallow in
.
The poem “November,” referring to “an interstellar literature / written within the lunar wind,” concludes with an homage to Patti Smith, from her iconic 1975 album Horses, “weeping for somebody’s sins / but not mine.” The poem, “The Deep State,” honors William Blake.
.
The cleverly titled poem, “Postpoemed,” summarizes Kaucher’s approach. It begins:
.
Take a few scattered words,
assemble them into a thought
which can be woven
into the finest threads.
Weave the thread into a tempo and flow
that creates a vision,
an intricate web of idea
to paint a portrait of conditions
and circumstance.
.
For four more stanzas he describes the recipe – “Introduce the characters”; “Get lost within the flow / and feel the fuzzy vibration of energy”; “Whisper the words down the alley / so they twist and distort / like an effluent prophecy.” The poem, he hopes, will “provide warmth / to all who have gathered / throughout the long night.”
.
While Kaucher sets the poem, “Snakes and cats” from the “Peripheral” section in Reading, Pennsylvania (“at the corner of 11th and Robeson streets”), it’s mainly in the “Debris” section that he takes us through the Pennsylvania countryside, in poems like “Johnstown,” “Shillington” (birthplace of the novelist John Updike),  “Shamokin,” “Sunbury,” “Tamaqua,” “Wilkes-Barre,” “Carlisle,” “York,” “Manayunk,” “West Scranton,” “Reading,” and “Altoona” – not to mention poems like “Road Ruminations” (“Towns like Tipton and Tyrone, / Bald Eagle and Port Matilda”) and “Perspectives of Butch” (Schuykill County).  It’s a peripatetic life, the observations and experiences of a holy mendicant wandering from town to town. In the poem, “In,” in West Chester, having returned east from Pittsburgh, he meets a young man in a bar.
.
I tell him about the Beats and Kerouac
and how inspiration and appreciation of the beauty
factors into achievement,
also commitment and WOW!
.
He’s like the wandering Zen master enlightening the populace. In the poem “Hobo Poet” he writes:
.
Sleeping on the street corner
doesn’t seem to get you closer to God.
Although, cold wet asphalt
and a curb to rest my head
may be the start of this poem.
.
Back in the first section, in the poem, “First light,” we find him waking up on one of those obscure street corners:
.
Ascend to obscurity blessed
till the blackness rolls golden gardens
of dawn born in detachment
and the essence of the void
rolls out divinity on Christ tongues
and enlightened Buddha drugs
.
I forever am revelation
.
Indeed, the narrator seems to embody an enlightenment that he doesn’t necessarily always share as he makes his way from town to town.
.
Peripheral Debris is full of Kaucher’s somber photographs – bridges, graveyards, kitchens, a bleak apartment, a lone seagull, downtown squares, a young woman’s tattooed back, abandoned houses, coin-op laundromats, an angel statue in silhouette. These atmospheric graphics enhance the sense of solitude that’s at the heart of these poems.
.
The second section – and the book itself – ends in Altoona, a town in the middle of the state that was founded by the Pennsylvania Railroad in 1849, from its very beginning a stopover on the way to elsewhere.  As always, the poet is observing, experiencing his environment. On the wrong side of the tracks, a homeless guy starts shouting at him, asking for the time. The narrator moves on. With a sly reference to Petula Clark’s 1965 hit song, he goes “downtown / to forget all my troubles, forget all my cares.” He encounters another anonymous citizen of the town, a suspicious woman in neon green slippers, as he scribbles “about the horse fly / bussing my head.”
.
After a while,
I was only as I am
and again on my way
home.
.
Wherever that is. Whatever “home” signifies, a place, a state of mind.
.
You can find the book here: Peripheral Debris
.
Charles Rammelkamp is Prose Editor for Brick House Books in Baltimore and Reviews Editor for The Adirondack Review. His most recent releases are Sparring Partners from Mooonstone Press, Ugler Lee from Kelsay Books and Catastroika from Apprentice House.