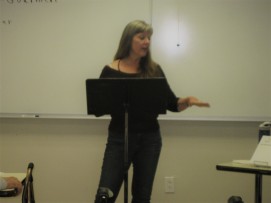 .
During National Poetry Month and the COVID 19 scare, we start April’s issue with poems from Eastern Europe by Aura Christi (born in Chișinău, Republic of Moldova, now living in Romania) translated by Petru Iamandi & Adam Sorkin. Chosen many months ago, these two poems now appear as if they were somewhat of an artistic foreshadowing of events stirring in the air; even their titles, “Spell” and “Elegy,” have a certain heaviness surrounding them.
.
With a dark circling wand, the last stanza of “Spell” casts foreboding sounds and a lasting image of a bird:
.
What rumble swirls,
roars, grows, struggles
like a bird caught
between life and death.
.
And her poem “Elegy” has the speaker “I” in a dreamlike state questioning existence:
.
(Lines 3-5)
You look at yourself in the mirror and listen to your humming:
I no longer am, I, I no longer am,
Everything’s strange, lost and distant.
.
In an atmosphere where:
.
(Lines 9-13)
No one’s around, you keep saying, no one at all.
But then why is the air filling
with something impossible and heavy?
The darkness grows bewilderingly;
soon it will fall over everywhere…
.
Moving onward in April’s issue, poets Nicole Yurcaba (Ukrainian-American) & Stanley Galloway collaborate on the poem, “Dnipro Duet,” which takes an angsty look at exes, monogamy, & life in a city (Dnipro) located on the Dneiper River in central Ukraine, ending at the sea of Azov. With the exception of the first and last lines, this poem is ironically written in 13 couplets, with a few here to entice you:
.
Couplet #2
eyes stinging clear covering all the distance that feet won’t cross
exes and the oh’s they bring to numb lips…
.
Couplet #9
tongue sweet as caramel on sausage and nails
driven through palms and feet             into wood
.
Couplet #12
as Narcissus contemplated the nature of singularity
and a woman contemplates the silliness of monogamy
.
This duo continues with a powerful poem entitled, “Liturgy for Ukraine” with captivating lines like:
.
…where a gleam of sunlight betrays
the ship’s bow displacing what we cannot walk on
gliding over shades of Scythian, Mongol, Nazi, Soviet
borders redrawn
redetermined
remapped…
.
…a faith brought by Cyril and Methodius
screened through scarves and centuries
carved on box lids and church doors
clothes and egg shells
wooden spoons and forks painted
with berries, blood, pride…
.
This poem ends with a resounding, “amen.”
.
Our next poem,  Kevin Ridgeway’s, “There Comes a Time” may or may not emulate Neil Young’s “Comes A Time,” but both have a “coming of age” feel. The last five lines are where the speaker of the poem sums it all up:
.
the meaning of life. We are
the anti-heroes who fell in love
with our own delusions of grandeur,
and we failed to save the world
from people like ourselves.
.
Luanne Castle’s poem, “Medusa’s #Metoo” mixes the classical wonder of our snake headed Gorgon in a fresh new “Metoo” way.
.
a coverup through tweet and text
a smear campaign of slut and sext
Poseidon in Athena’s studio apt
.
In texting the word “apt” in “studio apt” means “apartment” and not the dictionary definition of the actual word “apt” (having a tendency to do something). Here, Castle is clearly keeping with the modern-day texting language versus the classical meaning of look-alike words. A modern twist on an old myth indeed.
.
Lastly, we have Tim Suermondt’s poem, “Gulls Flying Over the Construction Site.” Tim’s poems are always filled with wonderful similes, images, and quiet contemplation.
.
In his opening line’s simile: “Like stealth bombers that are suddenly upon you—” and then the subtle but pronounced: “there they are.”
.
He has a seeable list of junkyard images. Then another simile for the workers at the site.
.
workers going at it with fervor / like the Egyptians of old.
.

With the gulls flying & his unique close comparisons to humans, this last poem is definitely worth a close read. Further, Tim’s poem also had a bit of eeriness, as stated in the last line of the poem, where the speaker turns “from the window” and goes:

.
into another room, my shadow flapping on the white walls.
.
.
But alas, it’s April and spring is everywhere, so please stay safe and know that all of you are in my thoughts & prayers.
.
In keeping with King Solomon or a Sufi poet or a Jewish folklore’s line (no definitive knowledge of its actual origin): “this, too, shall pass.” The sooner the better, I hope.
.
Peace & much love,
.
Diane Sahms
Poetry Editor – North of Oxford
.
.