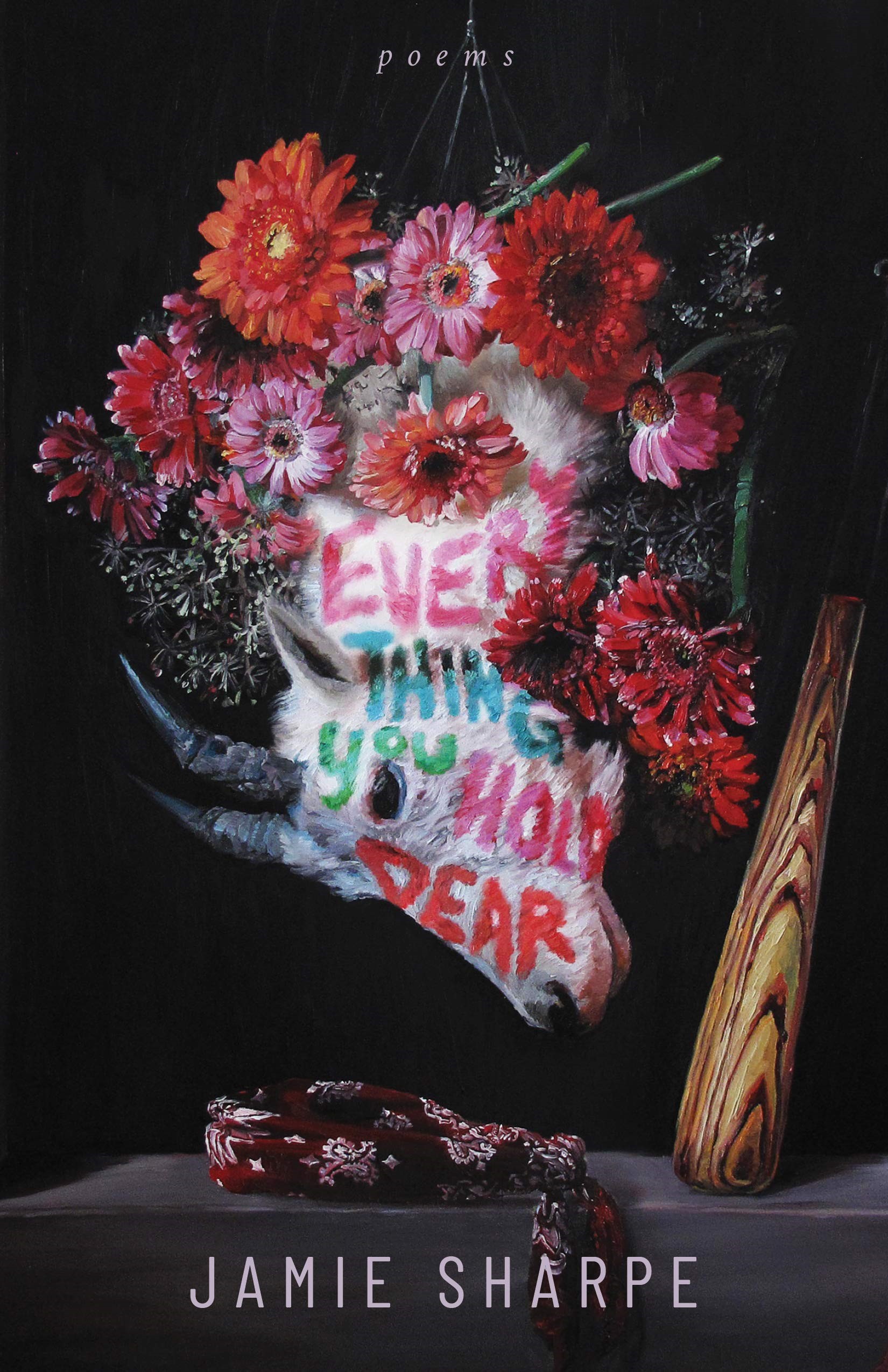 Following 2017’s Dazzle Ships, Jamie Sharpe’s latest collection of poetry is cunning, confusedly irresolute, and filled to the brim with a thinly-veiled sorrow-cum-cynicism towards poetry and the situations of living writers. Despite his outlashes toward the stereotypical situations that poets find themselves managing, Sharpe’s wit carries Everything You Hold Dear, which is compiled of 28 lyrical bursts and 27 micro-biographies. Often the anonymized vignettes and lessons that fill each page reflect a certain autobiography, alluding to Sharpe’s own struggles through the world of the literary, of publishing, and of poverty.

The book begins with the reflective “Turning the Alphabet Into a Band-Aid,” which in six lines informs the reader that this book is both within and beyond the deadpan of a poet’s futility and hopelessness. “When I was nobody, who I was / didn’t distract from what / I said.” (pg. 9) opens the poem, and the book. Admitting to ego and a history of self-determined success, Sharpe props the door for all manner of storytelling. This book, thus, is concerned with the problems and burdens of experience, and how experience damns us all.

Amongst poets I know,
wealth is “fiercely original.”

The manifestations of experience and the lived life of the writerly types are presented through an alphabetical concept of biography. Every other page is a poem about a writer who is only identified by their assigned letter within the alphabet, and each letter is represented both abruptly and distinctly. These stories, often allegorical and proclamatory in tone, exhibit a typification of the common situations poets find themselves in. It could be me, it could be you, it could be any of us who encounter the world of fame and recognition, advances and meager award money, and the many dead-ends of employment.

No job. Limited prospects. U, what’s to
be done with you?

As distanced and chiseled as they are, these alphabetical iterations also represent Sharpe’s own criticism and critical points of argument, at times scathing and at other times subdued, of the world keenly observed. That the book has been published during our time of supreme isolation, during a global pandemic, feels fitting, for the many of us who can only glance and gawk in a general, lamenting peanut gallery at the trials of our peers, as flat the failures and successes may be.

Interspersing these stories is a lazy string of poems that feels resonant of Sharpe and Sharpe’s own experiences. They are lyrical poems that often feel disconnected and irrelevant to Sharpe’s larger message within the alphabetical pieces. Many of the poems have occasional glimmers of potency, where the poet finds catharsis and, occasionally, self-actualization, but there is a thickened layer of ego fat that fills in all of the gaps. If Sharpe has been intending for a flighty sense of the mediocrity of experience to fill the spaces of insight, this intention has been accomplished.

Everything You Hold Dear, its title emblematic of an irony that haunts these pages, follows the many writers of the 19th and 20th centuries who have sarcastically engaged the canon and the general milieu of “the writer.” Sharpe follows in the shadowy footsteps of many relatively recent authors, like Joyce, Nabokov, Plath, Kerouac, and Bukowski, who have similar practices. These, and countless others, have gone to extreme lengths of fictionalization and memoirification to capture the feeling of the destitute and “alive” lifestyle of those damned, poetic souls. The ones who wander the earth in something between paralysis and determination. These salty critics often rely on sardonic methods to make their point regarding how ridiculous (and absurd? existential? nihilistic?) the writer’s world continues to be. Sharpe’s contemporary, Seattle-based Thomas Walton, operates in a similar manner through his recent lyrical essays.

At the end of the day, and the end of the collection, we are reminded that the world around us, the world for poets that must be dealt with by the poets, continues. Sharpe closes with a couplet, called “Foreword,” which symbolizes something greater (or, at least, mediocrely the same) around the corner. But that corner is not determined: it is not solidified and proven to be true other than the graying of a very Sisyphusian landscape

The book closes and turns our attention back onto itself, in a folding manner, encapsulated within the collection some vague, curious, greater offering. Sharpe is inadvertently contributing an ars poetica, stiff and defiant. It may be sloppy and blurry, but Sharpe, either consciously or not, is yearning for something more, something greater, something that contains fulfillment. As the book’s title suggests, Everything You Hold Dear is as much about the joy and a positive reason for being as it is for the shadow lurking behind. Thus the “dazzle” continues. Thus, Sharpe’s beautiful, quintessential poet’s damnation persists.

You can find the book here: https://ecwpress.com/products/everything-you-hold-dear