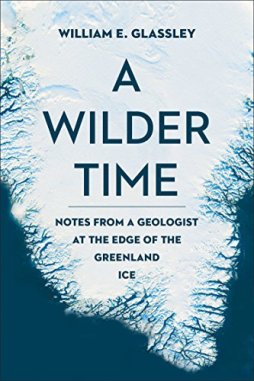 .
By g emil reutter
.
Notes From a Geologist at the Edge of the Greenland Ice
.
Glassley chronicles the expedition of three geologists in search of a truth that is in dispute. Along the way Glassley writes about the wilderness and nature of the massive walls of the fjords they are excavating. He writes of the hillocks, ridges, cascades of rocky knolls where plant life anchored itself in ice-wedged cracks and linchen attached to bare rock and of tundra pockets. There is a silence to the place as there is an absence of trees, houses, streets and people.
Glassley documents a mirage dancing along the horizon, thick horizontal blade of sharp turquoise blue cut along the land stretching hundreds of feet into the air. He writes of sailing on the water when the three hear a sound generated from more than two miles away, a mournful, wrenching sound, morphing into a feminine symphonic chorus, staccato screeches that turn out to a disturbed rookery where hundreds of gulls be gulls cried. Yet, the three believed they had just heard the sound of the Sirens, mythical, the sound Osyesseus had heard 3,200 years ago.
He writes in beautiful prose about his encounters. Such as just off camp in the bay a purplish color below the surface only to find thousands of sea urchins so densely crowded that their spines tangled together, of hundreds of small comb jellies, each shaped like a lantern, iridescent colors propelled as slowly turning lanterns in the sea. Always the observer, Glassley notices small ice blocks from a calving ice sheet floating lazily and that may have enough for some but Glassley notices more. Just under the murky water a river of fish were swimming, a school of herring like fish many feet wide unknown depth stretching in both directions as far as the eye could see. Suddenly the fish exploded, frantic panic possessed them as an Artic sculpin grabbed a straggler slowly sinking back down into the murky water as the herring regrouped and continued on their journey to an unknown destination.
During a thunderstorm he tells us of atoms that had once been part of the rock enclosing the sea were scrapped from surfaces by pounding boulders, released to float freely with the tides… mingle with other atoms whose origins were wind-blown dust, interstellar particles, dissolving dead animals and decaying plants… evolving into unities, become things that construct living forms… become part of snowfall on the high Himalayas, cause seasonal floods of the Ganges or just part of us. In this simple observation Glassely connects everything on earth, at times separate yet always part of the whole.
On a journey to bathe in the ice cold waters he returns to walk up a small bluff to a tundra bench. There while walking through the grasses, short stemmed flowers of the tundra carpet he encounters a female ptarmigan who appears and disappears as her colors blend in with the patterns of brown, tan and black color and texture of the plants. All the while she was protecting her hatchlings. Glassley speaks of the vertical and how much is missed. He knelt down taking in the sweet flower scents of Artic poppy, bell-heather, mountain sorrel, hairy lousewort and more. He describes it as being awash in a botanical sea. Had he not knelt he would never had experienced this beautiful event.
.
The purpose of the expedition was to prove that Greenland was formed by the collision of two continents. That the ocean between them was sucked down into the earth. The three geologists examine rock formations, individual clusters and patterns. Their work is fascinating and the story telling ability of Glassley brings the reader into geology in an unexpected way. He brings us into the mystery of ice and rock and along the way his simply beautiful observations of tundra and fjords, the wild life and plants that populate the place are amazing. A Wilder Time is a book for those who love nature and have that longing desire to learn the unknown, all hidden along the walls of the fjords of Greenland.
.

The official release date is February 2018 but you can check out the book here: https://www.amazon.com/Wilder-Time-Notes-Geologist-Greenland-ebook/dp/B06Y1RY67T