By Lynette G. Esposito
.
Published by Presa Press of Rockford, Michigan, Joan Colby’s, Her Heartsongs, presents 69 pages of poems that create an intensity of emotion with fresh views of every day and familiar events
The lead poem on page nine entitled Her Heart, discusses the difference between a man’s heartbeat and a woman’s.
.
The heart of a woman beats faster than the heart of a
man.
A billion heartbeats over a lifetime. No wonder a woman
Is tired.  No wonder she crawls into bed with a book\
before
The evening news arrives.  Her heart is misdiagnosed
Repeatedly.  The symptoms atypical.  Blockages in the
small
Arteries the tiny byways clogging unseen by the radiant
eye.
.
The thirty-line single stanza poem points out how the great artery of a man’s heart is called the widow maker. Colby suggests there is no name for the woman’s.  The implication of what breaks a woman whose heart is made of  cut- velvet or satin , emblazoned with a scroll surrounded by cherubs suggests the gentle complexity that brings a woman’s heart to break.  The skillful presentation of the differences between men and women gives a fresh view through the imagery of the heart  and the way it beats through life then stops.  She has  a light touch that resonates.
.
On page thirty-two, Colby’s poem Moving Men reveals how the things in ones life represent the past, present and future. Most of us have been through the common event of moving our things from one place to another so the reader is able to relate to the theme of the poem and understand the implications.  She begins the poem talking about keepsakes from a first love packed into sawdust and she ends the poem:
.
Days of muscle and sweat.  You watch
The truck back out of tne drive.  Stow
Everything that is left, an inventory
of  tomorrows.
.
The poem frames time in the things we move and the things we box up for later. Her use of the act of moving works well as a symbol both of time and the changes one goes through.
.
Philip Dacey says the poems that Colby presents show an emotional intensity and large sympathies. I agree.  The book is a pleasure to read for the commonality of subject matter and the fresh perception of how every day events define the human condition. She chooses such subjects as wash day, working, anniversaries and happiness to reveal and define individuals as works in progress. Colby is successful in her astute observations.
.
Her Heartsongs is available through Baker and Taylor, The Book House, Coutts Information Services, Midwest Library Services, and directly from the publisher Ptesa Press at Presa Press
.
Lynette G. Esposito has been an Adjunct Professor at Rowan University,  Burlington County and Camden County Colleges. Her articles have appeared in the national publication, Teaching for Success; regionally in South Jersey Magazine, SJ Magazine. Delaware Valley Magazine, and her essays have appeared in Reader’s Digest and The Philadelphia Inquirer. Her poetry has appeared in US1, SRN Review, The Fox Chase Review, Bindweed Magazine, Poetry Quarterly, That Literary Review, The Remembered Arts Journal, and other literary magazines.
.
.
Advertisement 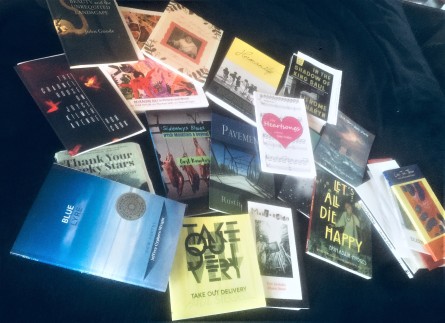 We update this link on a regular basis. These publications are available to reviewers for possible publication at North of Oxford.

Like The Appearance of Horses by Andrew Krivak – Bellevue Literary Press

The World Itself: Consciousness and the Everything of Physics by Ulf Danielsson – Bellevue Literary Press