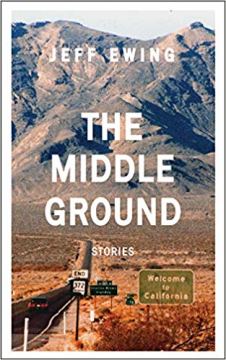 The characters in the nineteen stories that make up Jeff Ewing’s new collection, The Middle Ground, all seem to be trying to come to terms with bleak realities for which they bear some responsibility but whose fuzzy dimensions go way beyond their grasp. Indeed, as the story “Coast Starlight” begins: “Clifford could have been anyone, though no one from around here.”

In the story, Clifford, who may be a con man after all, fills a waitress’s mind with fantasies of movie stardom. Elena. Elena’s daughter asks her, “Don’t you wish something exciting would happen to you just once?” Elena remembers Clifford, then. Elena is married to the dull but reliable Matias. When she makes an impulsive trip to Los Angeles (aboard a train called the Coast Starlight) in a half-baked plan to pursue the dream of stardom, only to return to the stoic but forgiving Matias, you’d think there might be a moral here, like something out of The Wizard of Oz.  “No place like home.” But no, at the end Elena, if somehow wiser, is still indecisive, hovering ghost-like in the middle ground.

What is the middle ground? In the eponymous story, another one in which a parent and child clash over dreams, Ewing writes of the son, “He was one of those who can’t think any further than the negation of things. No nuance, no middle ground.” In the middle ground there are no clear answers to the situations people find themselves in. Maybe this, maybe that. Some of this, some of that.

Indeed, several of the characters in these stories deal with an unexpected celebrity that seems to shine a light on their lives, but only in a confused and upsetting way. The little girl Anna in “Lake Mary Jane” who is bitten by an alligator while she is swimming becomes a fleeting figure of interest, and she is forced to consider events in a new light. “When the gator had bit down, it was just a thing that was happening to her.” Then come the doctors, the reporters. Her dad and a character named Emily (mother? sister?) react in complicated ways. Finally, somebody shoots a gator in the lake they claim was the one that bit Anna. But her reaction? “All she knew was it had left its mark on her, which is what love does.”

In the first story, “Tule Fog,” the narrator remembers his high school girlfriend Lisa who became a celebrity of her own, giving motivational speeches, selling books and DVDs, on the subject of “Moving On.” She clearly moved on from the narrator, who feels stuck in his bleak California town where “no one anywhere, not even the dead, will wish they were here.” It should be noted that Lisa dies in an airplane accident near Lake Tahoe. “It took over a year for the wreckage to be discovered….”

Similarly, in “Coast Starlight,” as she’s finishing her shift at the diner, Elena comes upon another waitress, Shelly, flipping through a National Enquirer and, “tsking and shaking her head” at the shenanigans of the dubious famous people whose shenanigans are detailed in the scandal sheet.

“These people got everything you could want, and nine times out of ten they piss it away,” she said.

“Jesus, yes. Are you kidding? Nobody’s got anything to piss away.”

It’s strange and perplexing how right there in the middle ground where nothing is clearly one thing or another how events will make you feel your insignificance. And certainly this seems to be the great challenge for so many of the characters in these stories, this urge for a meaning to one’s life. The very title of the final story in this collection, “Hiddenfolk,” gives a hint to the great trials most of these characters face. “Dick Fleming is Lost” gives another, a story in which the protagonist, George, becomes obsessed with the whereabouts of a former classmate, who has gone missing.  “Maybe Dick Fleming would be found,” the story concludes, “and maybe he wouldn’t. Either way he was no longer alone.”

The stories in The Middle Ground are bleak but thought-provoking and end with the same ambiguity with which they begin, though indeed there is always a kind of resolution. Nothing ever quite ends “happily ever after,” but the characters all reach a kind of self-understanding that makes their destinies easier to accept.

Charles Rammelkamp is Prose Editor for Brick House Books in Baltimore, where he lives, and Reviews Editor for Adirondack Review. His most recent books include American Zeitgeist(Apprentice House) and a chapbook, Jack Tar’s Lady Parts ( Main Street Rag Press). Another poetry chapbook, Me and Sal Paradise, is forthcoming from Future Cycle Press.