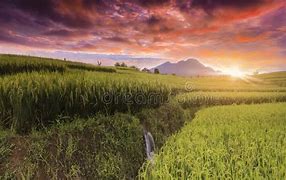 .
Looking Back
.
If I
never tilled rice paddies at sunrise,
never handpicked cotton under blue skies,
never dug irrigation canals in winters,
never mucked out stables before dusk,
never smelled purple soybean flowers,
.
if leeches
never sucked blood from my shanks, calluses
never formed hard and thick on my palms, the sun
never blistered my back,
.
if I
never acquainted myself with local peasants,
never worked with them shoulder to shoulder,
never chatted with them in their shacks,
never witnessed the joy and pain of their life,
.
if all this
never was a part of reeducation, I could
never relate grains to drops of sweat and
never imagine the oil lamp as the light of hope.
.
Five decades have long gone.
My body has become a rusty plow.
Some nights I dream of tilling at sunrise or
reading in the deep night with a desire
to turn to a new page of life.
.
Indebted to Land
.
After dusk surges
across the sky,
.
the moon appears
over the village,
.
full and graceful
like a Tang Dynasty lady
.
pacing in a red robe.
In a while
.
It floats up
over the plowed fields,
.
brightens
like limelight,
.
and sways
its radiant sleeves
.
as if ribbon-dancing
with throws and spirals.
.
At this moment
you stand by the furrow
.
and let petrichor
enter your body
.
and soul—
a way to accept
.
a way of life,
a way to balance
.
the way of self
through hard times.
.

Jianqing Zheng’s poetry collections include A Way of Looking, Enforced Rustication in the Chinese Cultural Revolution, The Landscape of Mind, Delta Sun, and Delta Notes. He teaches at Mississippi Valley State University where he edits Valley Voices.
.
.
Advertisement 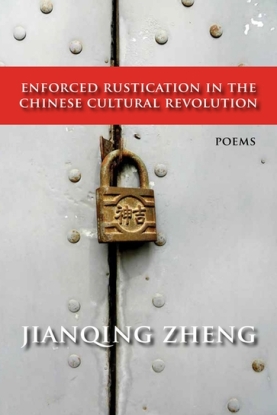 .
By Charles Rammelkamp
.
Ezra Pound, that great Imagist,
said, “Memories
are the white hairs of the heart.”

So begins the poem, “Memories,” in Jianqing Zheng’s collection of poems about the time he spent after high school in the Chinese countryside, during the Cultural Revolution, in the late 1960’s, early 1970’s.  Launched by Chairman Mao, the goal of the Cultural Revolution was to purge remnants of capitalist and traditional elements from Chinese society.  In keeping with this goal, urban high school graduates were sent to the country to be “re-educated” by the peasants.  These poems, then, are essentially Zheng’s memories of that time. They are also, notably, often written in the imagistic form, characteristic not only of Pound’s poetry but of traditional Chinese poetry as well.

Mao Zedong’s memory is central to this collection, as well. It opens with the poem, “Picture-taking in the Cultural Revolution,” on an image of the narrator having his graduation photograph taken, close to half a century ago. “With a Chairman Mao badge / pinned on my cotton coat,” he writes, the photographer directs him through the process, but just as the flashbulb goes off, Zheng blinks. “In the resulting picture // only Mao’s eyes were open, / not smiling.”.

The title of the penultimate poem in the collection, “Maostalgia,” a clever play on the concept of these memories, succinctly describes the whole rustication process he endured.

.
The art of losing wasn’t hard to get. I lost my voice in the Chinese Cultural
Revolution brandishing Chairman Mao’s Little Red Book and shouting
my heart out for his long, long life.
.
The process, for Zheng, goes from initial fervor – or at least accepting the validity of the goal of his rustication – to if not exactly bitterness, certainly to weary resignation.  The poem goes on:
.
One afternoon while I was picking cotton under the September sun, a
local peasant came over to tell in a casual voice that Mao died. “Oh!” I
responded and went on picking.  I was hungry; I cursed the sun for not
sinking faster…
.
The poem ends with a Pound-like image:
.
Great Wall tour –
each souvenir still sells
Chairman Mao badges.
.
In the poem that immediately precedes this one, “Responses,” Zheng writes:
.
We line up toward the Memorial Hall,
my four-year-old son twitters,
“Papa, who’s Chairman Mao?”
.

The short answer, of course, is “he’s the guy who completely shook up my life when I was a teenager.”  But Zheng merely points to the portrait above the gate of Tiananmen and replies, “He’s hanging over there.”  Zheng, who immigrated to the United States many years ago, now lives in Mississippi, where he works for the University of Mississippi Press.

But the bulk of the poems in this collection are indeed imagistic, without editorial comment, and take us through the daily and seasonal tedium of life in the country, working in rice paddies, planting and picking cotton, interacting with a variety of co-workers (Yi, Pigsy, Horse among them).  “Night Life on the Farm,” “Morning Chat,” “Lunchtime,” “Break,” “Before Supper,” “Rice Planting,” “Man on the Front Porch,” “Playing Solitaire”: the titles of these poems and many others like them tell you the quotidian subjects of the verse, the implicit tedium that is not without a certain serenity as well. “In the Cotton Fields” begins: “Cotton picking is as drab as reciting / Chairman Mao’s little red book.” If this wry observation is not enough to convey the thought, consider the gorgeous image of the final stanza, like something out of a French Impressionist painting:

.
My eyes blurring,
straw hats float like life preservers
in a white sea of cotton.
.
The food is as bland and uninspiring as the work. “ At / night, our life was as flat as our farm work, tasteless as rice and pickled / turnips we ate each day.” In “Lunchtime,” more of the same:
.
Back from the rice paddies for lunch, we slump down on the porch, listless
as dogs. Chopsticks stir slowly in bowls to pick out tiny rocks; white
rice and brined turnips are tasteless as day.
.

The poem “Hunger” continues this theme of bland tedium.

.
Are you hungry? If you are,
stop and graze by the creek.
I’ll try the sunset.
I don’t even have ten fens
to buy a bowl of re gan mian
in a roadside eatery.
The setting sun on the horizon
is like a piece of ham
my stomach keeps rumbling for.
.
Later on in the poem he writes:
.
The sky is growing ash-gray.
The sun has set within me.
I’m full, full of rumbles
in my stomach. I want to slip
into a dream, a dream of feast…
.

By the time we get to the poem, “Waiting,” we can feel the desolation brought on by the tedium. “When can I also go back to town? / I’ve been waiting the whole winter….” The poem concludes with his resignation: “I clench my desperation, listening / to frozen rain tinkling the roof….”

In the next poem, “Goodbye,” Zheng gets his wish.  He leaves the farm before dawn, his college admission letter in his pocket, going without fanfare, not wanting to endure the goodbyes of his workmates

.
Looking into Hu’s eyes
black as bullet holes and desperate
as if with claustrophobia,
I crook a faint smile,
my mouth twitching without words.
Last night he cried over wine
at my farewell party. A handshake,
I throw myself into drizzle.
.

There’s a calm stillness in these poems that belies the seriousness of this time for millions of lives, but the impact is nevertheless felt in these spare, imagistic verses.

Charles Rammelkamp is Prose Editor for Brick House Books in Baltimore, where he lives, and Reviews Editor for Adirondack Review. His most recent books include American Zeitgeist(Apprentice House) and a chapbook, Jack Tar’s Lady Parts ( Main Street Rag Press). Another poetry chapbook, Me and Sal Paradise, is forthcoming from Future Cycle Press.