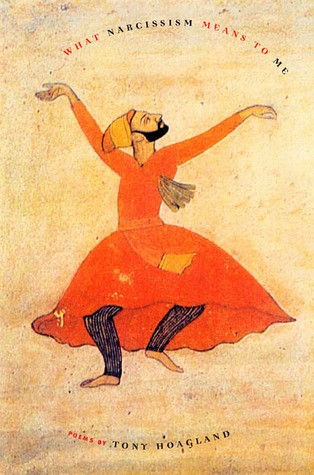 .
By Stephen Page
.
After I read What Narcissism Means to Me, I wished I had chosen The Donkey Gospels.  Glancing through the other, after I read the first, I sense more immediacy.  Nonetheless, I arbitrarily chose to study Narcissism, will accept my choice, and thus I shall report.  It’s a great book.  A good read.  The structure is interesting, with America, Social Life, Blues, and Luck as titles of the four sections, as if that were the hierarchy from top to bottom for self identity.  The poems are narrated sarcasticly, ironically, self-loathingly.  The point of the collection is to show that when the self is the center of the universe and the ego presides over community and society, problems arise—racism, dictatorships, presidents taking self-motivated actions without concern for the people.  Hoagland portrays the narrator, the “I” of the poems, as narcissistic, but this is aptly a tool for pointing out the fallibilities of narcissism rather than a point-of-view for confessional poetry.  Well done, Mr. Hogland.  I especially liked the poem the second section is named after, “Social Life”:
.
After the first party peters out,
Like the gradual slowdown of  a merry-go-round
another party begins
.
and the survivors of the first party
climb onto the second one
and start it up again
.
Behind me now my fiend Richard
Is getting a fresh drink; Ann, in her black dress,
Is fanning her breasts; Cynthia is prancing
From group to group,
Making kissy-face—
.
It is not given to me to understand
The social pleasures of my species, but I think
What they get from these affairs
Is what a bee gets from flowers—a nudging of the stamen.
…..
.
What I like about the tree is how
They do not talk about the failure of their parents
And what I like about the grasses is that
They are not grasses in recovery
.
…because silence is always good manners
and often a clever thing to say
when you are at a party.
.
All introverts can relate to this poem, all observers, all insightfuls.  Much of social life is childish, ridiculous, pretentious, an act, yet, it is probably natural for human species to behave this way.  Those who do not find it natural to socialize sometimes resort to the readily available drug alcohol.  Hoagland does offer a suggestion.  Listen.  Don’t act.  Don’t expound.  Make an appearance but do not lose the egoless self for the self that needs to be socially accepted.

You can find the book here: https://www.graywolfpress.org/books/what-narcissism-means-me

Stephen Page is the Author of The Timbre of Sand, Still Dandelions, and A Ranch Bordering the Salty River. He holds two AA’s from Palomar College, a BA from Columbia University, and an MFA from Bennington College. He also attended Broward College. He is the recipient of The Jess Cloud Memorial Prize, a Writer-in-Residence from the Montana Artists Refuge, a Full Fellowship from the Vermont Studio Center, an Imagination Grant from Cleveland State University, and an Arvon Foundation Ltd. Grant. He loves his wife, reading, travel, family, and friends.