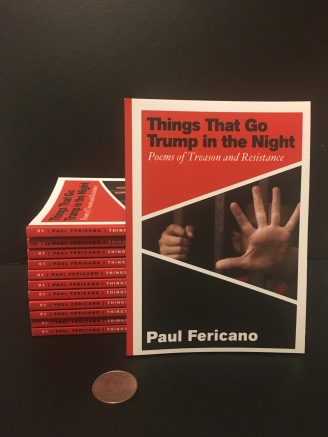 .
By Charles Rammelkamp
.
Very soon, in the next few weeks, those Americans who have not mailed in their ballots will go to the polls and elect a new president.  For many, the last four years have been one catastrophe after another. Late-night comics have tried to ease the horror with jokes, but ultimately the only way to ease the angst will be to elect a new president, and who knows how quietly Trump and his minions will go?
.
That said, Paul Fericano’s parodies are not only funny, but they are intelligent, with references ranging from Shakespeare and Mark Twain to Ethel Merman and Marlon Brando, from Humphrey Bogart and Speedy Gonzales to Ezra Pound and Sir Walter Scott.  Some allusions may be more obscure than others (Paul’s First Epistle to the Corinthians is certainly not obscure, but I can’t say I ever really read it), but Fericano touches many a cultural landmark in these short, humorous passages, from William Carlos Williams’ “The Red Wheelbarrow” to Rodgers and Hart’s “The Lady Is a Tramp.”
.
The Invocation, and hence the title of the book, refer to the traditional Scottish prayer:
.
From ghoulies and ghosties
And long-leggedy beasties
And things that go bump in the night,
Good Lord, deliver us!
.
In Fericano’s verse, it’s the press secretaries from which we ask to be delivered. The book was completed before the Fox News refugee, Kayleigh McEnany, took over the position of chief propagandist, defending Trump’s lies and failures, spinning his cruel policies into something compassionate – or at least Obama’s fault! –  and attempting to turn the disastrous pandemic response into something heroic and decisive, all with a straight face, despite the staggering numbers of dead, the chaotic “policies,” the mixed messages about masks and social-distancing, the breathtaking failure to come straight with the American public about the danger of the virus. Yes, Lord, please, deliver us!
.
Good Lord deliver us
from moochies and huckabees
and long-leggedy spicers
and things that go trump in the night.
.
The collection is divided into eight sections, all of which begin, “Trump Pardons…”: Elvis (Make America Gyrate Again), Harvey Weinstein (Make America Date Again), Obama (Make America Hate Again), Speedy Gonzales (Make America Immigrate Again), Pence (Make America Mutate Again), Reagan (Make America Hallucinate Again), Charles Manson (Make America Tate Again), His Colon (Make An Enema Wait Again).  The wit is dagger-sharp, the satire devastating.  The final section, Trump Pardons His Colon, begins with three variations on a theme: “Trump of Allegiance” (“I trump allegiance to the swag / of the Norman Bates of America”); “Dummkopf von Allegiancestein” German Translation (“Ich trumpf allegiancestein to zee trumpf / von zee Vereinigten Trumpfen von Amerika”); “Durak Iz Allegianceki Russian Translation (“Ya prevzoshel allegianceki to trumpfnoy / iz Unitenyye Trumpfi Ameriki.”). Russians, Nazis: why do these references seem so appropriate? So spot on?
.
The Huckleberry Finn parody, “The Adventures of Huckleberry Trump,” is similarly on target in lampooning the opening paragraph of The Adventures of Huckleberry Finn, with reference to Hitler:
.
You don’t know about me unless you’ve read a book by the name of Mein Kampf, but that doesn’t matter. That book was written by Mr. Adolf Hitler, and he told the truth, mainly. There were some things which he lied about, but mainly he told the truth. Let me tell you something: I have never known anybody who hasn’t lied at one time or another, unless it’s Joe Goebbels – Adolf’s Joe Goebbels, that is – and Himmler, and the Angel of Death are all written about in that book, which is mostly a true book, with some lies, as I said before.
.
The longest poem, “The Secret Plot to Kill Trump,” the penultimate poem in the collection, is inspired by a mash-up of speeches Trump has given, at a rally in Phoenix, Arizona, at a factory in Ohio, and at a CPAC convention in Maryland, in 2017 and 2018. It begins with an epigraph from a speech Robert Kennedy made about an erosion of a sense of national decency, and it ends with the last public words RFK ever spoke, just before he was assassinated in Los Angeles (“and now it’s on to Chicago / and let’s win there”).
.
Subtitled Poems of Treason and Resistance, this book is guaranteed to get under the very thin skin of  a certain “orange peel / barrel” (see “William Carlos Williams Trumps Himself” for this reference). Things That Go Trump in the Night will either be an ominous warning about the next four years, or it will give a good, hearty laugh, if mixed with the bitterness of what this president has done to our country.
.

You can find the book here: Things That Go Trump in the Night | yunews

.
Charles Rammelkamp is Prose Editor for Brick House Books in Baltimore and Reviews Editor for The Adirondack Review. A chapbook of poems, Jack Tar’s Lady Parts, is available from Main Street Rag Publishing. Another poetry chapbook, Me and Sal Paradise, was  published by Future Cycle Press.  Most recently Catastroika  was released by Apprentice House in 2020, Ugler Lee released in 2020 by Kelsay Books.