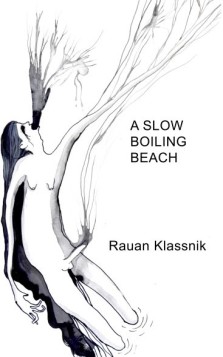 “The sound of a train, ship, flute. Children drift into the trees. Heads on poles, on the back of a truck, firing into the air. They sing birthmarks and stiches all over me. Red and green mirrors. A blurring knife.” (from “MOTHER AND CHILD”, page 11)

Rauan Klassnik, author of The Moon’s Jaw (2013) and Holy Land (2008), has once again painted a portrait of a universe as disrupted as it is confident, as demented as it is formulaic: A SLOW BOILING BEACH is that portrait and it is as fascinating as it is ornamental, brute ugliness and attraction rippling with horror and total, existential embrace of traumatic moan, sigh. The language of an interior of pain, violence, and sexuality is masked with hallucinations and thrills. There is the heartbeat rhythm that lines these pages as they slice and splay organized disorder from page to page.

“I wrap it around me as I’m jerked up into the burning air. Cold swaying hooks. A knife pushed slowly into my heart. The dog’s head comes off in my hands.” (from “A DESTROYED NERVOUS SYSTEM”, page 13)

The “antithetical literary work” contains a fairly structured format. Six sections composed of scattered prose that strings together the monstrous, horrific story of an individual or sequence of individuals (depending on how far you lean over in your chair while reading it) who come together to merge or separate in active, desecrating union. There is a sexuality that is vicious and filled with animosity. There is a figuring of Thanatos that flares time and time across the individual pieces. These motifs blend and blur. They exaggerate and suffocate. They are united as much as the human and other animal figures are united. And it is profound, A SLOW BOILING BEACH, in its potency to persist as an unnerving guffaw into the 21st Century abyss.

“An owl sits in a tree. I’ve had enough pain and euthanasia. When I climaxed it felt like someone shoving knives in my eyes.

“You are asleep, digging into the cold. I swallow them all gliding in over the snow. Boys hanging in the trees.” (from “IN A PYRAMID”, page 38)

The book’s six sections have underlying threads, which show their surfaces elaborately and illusively. There is illusion and there is provocation. Tones move from mercurial to vainglorious. There is ever the hint that this world can be refracted. It is at once cubist and at once dominant in its language and the underpinnings of the literary reality that may or may not matter. In the end: these are prose poems that can continue to end as much as they can continue to begin. Like Battaile and Camus: the mythos is captured through an ever-consuming sense of awe and dread that glistens and terrifies one in the same. For Klassnik’s speakers, the swirling appearance of this horrific reality is both urgent and disturbed, both inspiring and damning. It is a kaleidoscope of realization (epiphany towards meaning) and function-meets-nonfunction. It is opportunity and it is suffering. The resulting aesthetic, developed across the pages, is one of shadow and that which is long-since wrought. It is, as the title of the book suggests, a slow boil.

“A sky bruised like a corpse. So peaceful. A horse dipped in gold. And she’s sitting in the garden, painting the lunatics. Bloodshot. Thieves.” (from “THE RICHEST YACHT”, page 43)

As with Klassnik’s former collections, there is a distinct emphasis on the multisensory imagery of material and surface. That which we (as living, livid beings) are composed by. That which we must work with. That which we can use and abuse. In which we find constraint. There are holes, niches, corners, and funnels. There are places of privacy and intimacy, and places of public affect. There is metal, plastic, and wood. There is flesh, feather, scales, shells. Materials are universal, collected, and polarizing. Within the book, examined is the material world of detritus that forms our contrasted realities and perceptions of the agony of experiencing and knowing within those realities. It is also the material world that affords us the symbols that allow us our rituals. From anuses to eyeballs, from fetuses to cakes, living means confronting all of the lived experience without exception. It is fuel for the speakers of this book to persist in their desires and their agonies.

“I take the bus. A bunch of convicts lighting up the skies flowing beneath their cages. They love the river. And the gaudy azalea bushes. People are killing. People are kissing.” (from “PHEASANT IN THE ROAD”, page 51)

Much like Dante and de Sade, the realities by which and through which Klassnik writes are largescale and appropriately daunting. They are unconquerable, indomitable, and forever chastening.

“You are filled with mist, a scent, livid, flying and triumphant.

“You come from the womb and anus. A giant eye with little eyes hidden around it in the branches and grass. Plague creeps through.” (from “POLLEN”, page 95)

Philadelphia’s Kim Gek Lin Short partially describes the book as a “slashed paradise to the max—the civilizing byproduct of subjugation.” Both inviting and unreasonable, A SLOW BOILING BEACH finds its invitations and antagonisms through its sourness, its revolt. It is the difficult to swallow. The awkward and punishing. It is the bright that leads to blindness. It is ripe with upset and disintegration, and can cause brows to raise and buttocks to clamp shut ever-so-slightly. Ever so demonically, ever so mildly. It is a book that stiffens the back and smothers the breath. And it is also a book of imaginable solutions to the world that has shattered and fragmented. Through Klassnik’s megalomaniacal efforts, the poetry of this landscape still rings with Keatsian romanticism. It is still raw with the rupturing, inescapable beauty of our consciousness, no matter how agitated and impalpable at times its heights reach. To be with these efforts is to swallow Klassnik’s worm, to approach Klassnik’s giant eyeball, to await the outpour of fluids and results and to process them the way we always process them: with the agonizing intention perpetuating hideous and beautiful growth and, like the speakers themselves, a drowning sense of fatigue. And it is our sense of fatigue, collective, systemic, and from the skull that weighs all of us down towards the earth. “Its face is a skull. It pulls a soft face on,” writes Klassnik (“MY WEDDING DRESS”, page 74), and with this meeting of the intimate we find the grotesque, clever and relentless as ever.

You can find the book here: https://www.amazon.com/Slow-Boiling-Beach-Rauan-Klassnik/dp/1688984313