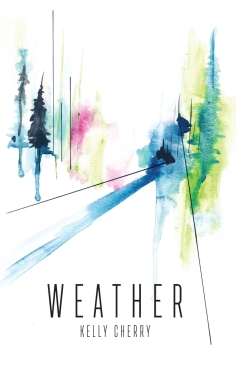 Cherry is a narrative poet in this slim collection of poems. Within its pages she captures turbulence, calm, defines the seasons. Cherry captures the wind in the poem, Birds on the Patio Feeders, No. 1:

The big wind scours the sky as if the sky is a giant kitchen sink/ Trees bend, hanging their heads, sorrowful/ Such drama. Yet we are captivated to see.

Yet the collection is just not about weather, it is about much more such as these lines from the poem, This Should be Winter, reflecting what the future may hold:

Thrity or forty years from now, we may be heading north in search of water, in search of air that can be breathed, in search of food that’s not been wrecked before it’s harvested.

Cherry captures the essence of a storm in both its quietness and violence in the poem, Rain:

A sprinkle doesn’t even seem like rain.
It does an almost silent dance, then stops.

demure as a virgin. The breaking thunderstorm
rails at everyone, but the daylong soak

that rescues trees, flowers, and failing farms
sings a song both simple and everlasting.

In the poem, The Start of Spring, she writes of the young in comparison to the old:

Spring is for the young, and the young/ put smiles on the old. Maybe rueful smiles. maybe sagacious smiles, maybe fond smiles/ as the old remember their checkered youth…The young are always foolish/ the old, always reminiscent.

She writes of a beach party and the aftermath in the poem, The Fourth of July:

…men and woman burn logs on a beach and hope to get lucky/ Sex is such a driving force, and then?/ Its not. It leaves us high and dry/ as if our bodies were nothing but old clothes/ hanging on a weathered, worn-out laundry line.

The poet writes of an elderly woman who keeps bits of the season in Autumn Leaves: The deaths of the living, even leaves/ sadden an elderly woman once a child/ dragging her feet through fallen leaves or pressing/ the pretty leaves into a scrapbook.

Cherry is a forecaster as she writes in the poem, Mayday:

It strikes terror in our hearts/ like a fire alarm…Is it the end of our world?/ Of course it is. Earth’s dying./ Our world is ill, regurgitating/ its insides.

Weather by Kelly Cherry is not for those who enjoy the disconnect. This collection of narrative poems connects with the reader through plain speaking combined with excellent imagery. Cherry writes of the seasons but also utilizes weather as a metaphor for lives lived and more directly the condition of the earth.

g emil reutter is a writer of stories and poems: