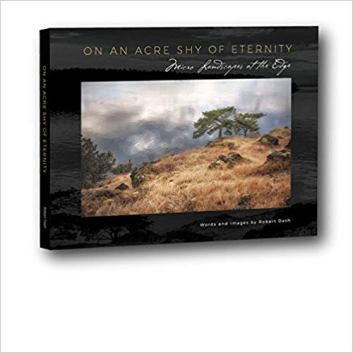 .
“When it comes to exploring, it’s possible to travel real distances without going far at all.”  – Robert Dash, from the “Preface”
.
Epic encounters across time and space are often represented with examples of time and space. Such is the case of the 2017 book of poetry and images by photographer, naturalist, and educator Robert Dash. In his insightful, exhausting collection, where he examines the microscopic through the lens of the human, Dash reveals that time and space do not need to be large to be encompassing. This is a book that at its core explores the artistic fervor of the scanning electron microscope, Dash’s tool and medium of choice, and it is a book that explores how the photographer might internalize and become captivated by the worlds that fill their imagery.
.
“A community of processes, creatures and tools–termite jaws, fungal hyphae,
tunneling earthworms, wind, ice, drizzle, springtails, pecking nuthatches,
chemical magic, entropy, the ruthless blender known in slang as time–built this bridge.”
.
(from “Gossamer Thin,” page 99)
.
On an Acre Shy of Eternity reveals what an artist can do in a confined, constrained landscape. The muse cries out as a collective: from cliff rock to bunch of moss, the inherited imagery that is within, beneath, deeper still, is that imagery which is cherished and collected. In making this book, Dash situated himself across time while focusing on the subject of his home: the microcosmic subject matter within and along the periphery of his property, his corner of one of the San Juan Islands in the Salish Sea. The world is vast and vaster still, and it is one of mystery and intense—enormous even—forms of inclusion.
. 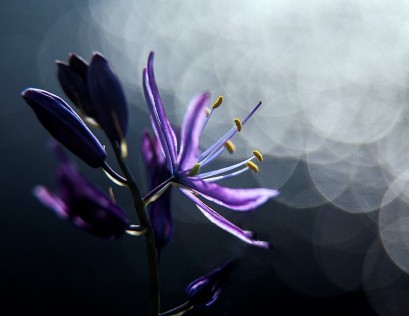 .
The book is divided into four natural categories: plants, animals, water, and stones. Their presence reveals a quasi-alchemical relationship to reality and materials, and yet the subjects within carry range and precision. These are real images, a captured reality freakish and exquisite. Like the description of the X-Ray in Thomas Mann’s Magic Mountain, the use and results of the scanning electron microscope feel hyper-potent and, at times, unfathomable. And in their space of fringe, in being known and untouchable one and the same, Dash provides juxtaposition, and tension. This leads to romance. To poetry. To feverish, undoubtedly spiritual insight.
.
“this one hops me back across decades
and reveals every wave, leaf, cloud, shadow and feather
as a trace of eternity.”
.
(from “Small Wonder,” page 57)
.
This circumstantial structure is directed by Dash’s own poetry. The poetry begins with the photographs themselves. Dash has given relatively straightforward descriptions to the plates within the book, which when strung together read as a poem themselves: “Grass pollen: four hundred pollen grains would span a pinhead,” “Garry oak leaf in autumn,” and “Cliff ice at sunset,” to name a few. The educator, the naturalist, in collector’s mode, constructor’s mode, educator and describer, traveler of the unknown universe beneath our limbs.
Poetry is here: poetry is reflexive, and it is functional, and it is emotional. The photographs may be visual poems through and through. And then, too, most of the photographs in the book are paired with their own short, lyrical poem. The text is elegant and brief—enough to entice and allure. It is poetry that is as cleverly portrayed as the subjects of the photography. The verse may commentary on the process itself: “and you can’t parse these facts / and sometimes life falters even when relief is at hand” (from “Relief at Hand,” page 72). And at other times, Dash extends the lesson or intention of the photograph with additional explanation:
.
“Down below, water shatters bedrock, free silica for diatoms
who float free to make half the globe’s oxygen,
only to come back around
wed to hydrogen
a lover returned.”
..
(from “Water is a Lover,” page 82)
.
Dash’s efforts to provide a mixture of science and art is what I consider this book’s best quality. The photographs and the images each add to the weight and the significance of the overall message within the book. Much of this has to do with the flow of material across pages. Book designer Robert Lanphear allows Dash’s work to shine—quite literally, the expansive and intricate imagery is set evenly alongside the text. Images and poetry complement and provokes, in a dance between representation and self-awareness. As much as this book is about the tides that sit swollen alongside Dash’s island property off the coast of Northern Washington, so too is this book about the rhythm of the artist who inhabits, who occupies, who respects the surrounding and enveloping world.
. 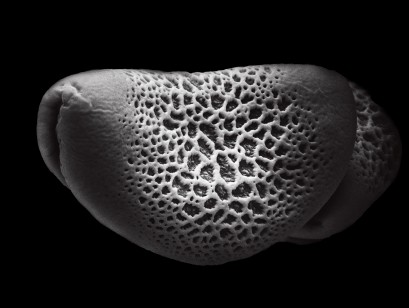 .
All but three of the photographs in the book were taken on this small nook of island geology. Three others were taken while in a boat, not far from the property. This proximity is fascinating when also considering the process of Dash’s poetics. The invisible hand of the writer, the invisible hand of the photographer: a sense of place is only afforded through the work itself. But Dash is generous in his literal descriptions of the work and offers challenges to the reader after setting the stage. This context, this establishment of bond, I can’t help but imagine reflects the bond Dash has discovered between his life in the macrocosmic alongside his life in the microcosmic.
.
Since the publication of On an Acre Shy of Eternity, Dash has continued his use of and passion for the scanning electron microscope, and the abundance made visible with such a tool. His collection Food for Thought – Micro Views of Sustenance: Threats and Prospects looks at the resources we (and the world) consume, from food to soil, from crops to deforestation, and the conversations in between in the context of climate change. Dash’s photographic work has evolved into even greater levels of precision, and curation. To see his early microscopic work thrive alongside his recent, empowered imagery is marvelous.
.

You can find the book here: https://www.amazon.com/Acre-Eternity-Micro-Landscapes-Edge/dp/0578188716