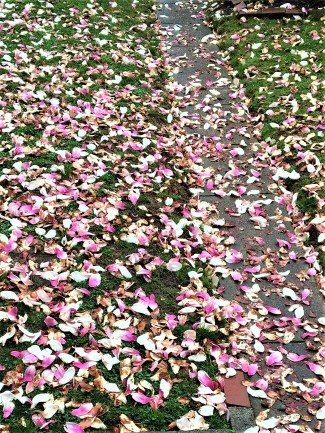 .
Archaic
.
Yesterday when I was walking home
from making those essential purchases
that justify my walking out in the world,
and was listening to the trees seethe
with breath anticipating rain, I passed
a blossoming tree–after all, it’s spring–
suddenly caught up in a whirling wind
and I found myself surrounded by pink
.
petals in a sudden dense flurry,
an unaccustomed sweet delicacy,
a fragrance meant ordinarily
for bees, to attract them to the nectar
that is the refined drink of the Greek gods
but the Greek gods are extinct now, so I
may as well get drunk on archaic fragrance.
.
Last Wishes
.
Back when he was my father-in-law, he
told my then-wife that if he ever lost
the use of his legs, he wanted to die.
Fortunately, or un-, he lost his mind
and saw strange spirits walking through the house
before that part of the brain that controls
the motor functions disintegrated.
When I last talked to Marta over the phone,
she and her mother were both exhausted
from packing all the furniture, dishes,
books, the machinery in Papa’s shop,
to be moved to the nursing home or sold.
That, and from caring for a sentient
metabolism without self control.
.
Don Riggs has been writing verses, if not poetry, since 1964, when he published some in The Pine Cone, newspaper of Pinecrest Elementary School. He has gone through periods of influence from Edward Lear to Longfellow to Dylan Thomas to James Wright to Emily Dickinson till now he writes ten syllables per line for fourteen lines. Count them! He writes each morning in the bath.
.