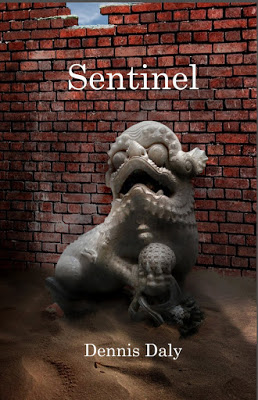 (Click on title for full screen view)
.
Review by Zvi A. Sesling
.
Previously I did a review of a Dennis Daly book of poetry in which I stated that he “has been there, done that…” In Custom House Daly takes readers to ancient foreign lands, places of the heart and love-hate relationship with the work place.
.
In his latest poetic offering, Sentinel, Daly out does himself with mysterious poems that convince you he has an insider’s knowledge of the espionage game as played by the likes of the CIA and NSA, maybe even the FBI and any other three letter abbreviations you can think of. He does all this in the style of Wallace Stevens, itself not an easy accomplishment.
.
The poem “Secrets” sets the stage of the dark and dangerous with an opening line that reminds me of the old radio program “The Shadow,” which began with the oft quoted
“Who knows what evil lurks in the minds of men…”
.
Channels that lead nowhere, nondescript
Dead ends that greet you like vacant smiles,
Yet there are caches of grim jewels
Hidden somewhere. A caution wire tripped
.
Sets off the venal security
Alerting them to tell-all voices.
Silence the inevitable key
To cults that form the veiled basis
.
Of earthly power. The living runes
Chiseled onto this fantastic world
Redolent of summer afternoons,
The ammunition spent, flag unfurled.
.
This is how some reach their bitter end.
They sieve out quiet confidences
To spidery contenders, misspend
The rest on red win and circuses.
.
Is this a childhood action movie, perhaps a serial? Could it be 007 in action? Jason Bourne on the loose? What it is not is a dream, and Daly lets you know that not all spies can keep their secrets, and often spending on drinks and pleasures leads to their demise.
.
In “Patterns” Daly deals another dark and mysterious poem for the reader to try and interpret:
.
The wave and the trough, the unmade man
Takes his turn in the froth-fingered air,
The usual briskness of elsewhere.
Then back again, at least that’s the plan
.
Of sensible pretense, not reckless.
Not at all. Closing the hatch on sturm
And drang, he nods to all, reaffirms
Solidity and anxiousness
.
And doubt that public certainty births.
He rehearses the routine. Danger,
So predicable, looms. He’ll wager
Life and limb. His stubborn will unearths.
.
Fangs and feral claws. The wait not long
As he prepared for the frantic day
When fractal stress and those patterns may,
Seen from afar, go wrong, very wrong.
.
The man of duty performs his task, he is, perhaps, too close to see the impending results while his superiors, his handlers can see the coming end, the losses he will suffer, maybe even his life.
.
If you are not convinced of the darkness or the espionage, sink into “Agents of Influence” which incorporates some of the best thriller writing into Daly’s bag of poetics. All of pure noir.
.
One by one the rocks are chiseled out,
Disassembled, a quick erasure
Of foundation. The shake of structure
Noticeable. As mildews of doubt
.
Climb tapestries, traitors praise new gods,
The future guards of our guided wills.
Frescoes peel, plaster crumbles, fulfills
years of prediction, multiple frauds.
.
Steeples, dwarfed now, but still extend up
Toward the unresistant stratosphere.
Demagogues assign fault. The frontier
Forts abandoned, rabble envelope
Our cities, poison our sweetest wells.
Men escape through the mountain passes
Or freeze where they fall. The blown bridges
Mapped months ago. Devolution sells.
.
You may not find this the easiest book of poetry to read. Perhaps you will read a number of these poems two or three times and possibly reach a different conclusion each time. But one thing is for sure,Sentinel is well worth the effort because your mind will compare it to thriller novels, movies, television shows. In the end you will simply marvel at Dennis Daly’s ability to incorporate espionage into a poetic form– leaving you wanting more dark shadows and mysterious meanings. You will be pondering long after you have finished reading a poem or the book. Highly recommended.
.

You can check out the book here: http://cms.reddashboard.com/Dennis-Daly/